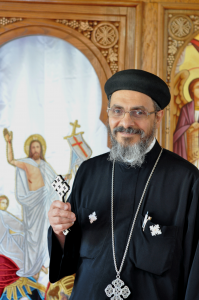 Hegumen
St. Mary's C.O.C. St. Paul, MN
Phone: 123-123-1234
me@com.com
Fr. Youannes Tawfik has been serving St. Mary’s Coptic Orthodox Church in South St. Paul, Minnesota and its growing congregation since 1999. He was ordained as a priest by His Holiness Pope Shenouda III on July 7th, 1999 and served in St. Mary’s Coptic Orthodox Church in El Materya, Egypt. Before receiving the Holy Sacrament of priesthood, Fr. Youannes had an active role in the church he attended serving as a youth leader, a Sunday school teacher, and hymns teacher. While he was dedicating so much of his time to the church, Fr. Youannes also received his degree in general surgery and urology in Egypt. He practiced medicine for 16 years before he was called to the priesthood. Fr. Youannes was elevated to the priestly rank of Hegumen by His Holiness Pope Tawadros II on March 3rd, 2013. We pray that Our Lord may bless his ministry and service, giving him wisdom, grace, and blessing to guide His flock in peace.

There are no upcoming events.