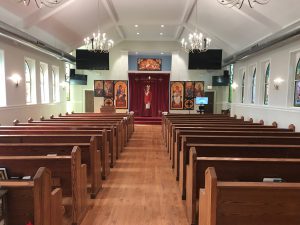 2500 N. Talman Ave., Chicago, IL, 60647
info@stpaulchicago.org
On November 27th, 2011, HH Pope Shenouda III gave his blessings to start a downtown missionary church in Chicago, called St. Paul. Before that, Copts had to commute about 25 miles to the closest church situated in the suburbs. These churches did a great job serving parishioners in the city of Chicago by conducting regular bible studies. After several years, a small group felt there was a need for not only a church in the city, but one that had more of an outward focus to serve the community around her, as well as the 2nd generation, intercultural marriages and to evangelize in Chicago. On Jan 28th, 2012, the inaugural liturgy was held, where HG Bishop David, local clergy and other supporting clergy celebrated the Holy Divine liturgy. Services then began by praying in a Greek Orthodox Church on Saturday's supported by local clergy. By the grace of God, in April of 2012 the first church was bought in the neighborhood of Logan Square about 5 miles from the downtown Chicago area. Less than one year later, March 3, 2013, Fr. James Mikhail from Ottawa, Canada was ordained on the altar of St. Paul and services moved from Saturday to Sunday. The congregation's number and needs grew. The lack of space in the church itself, lack of Sunday School classes, lack of space for a social hall and other needs required a bigger space. Also by the grace of God, a bigger church was purchased on March 1, 2016 where it became the permanent home in November of 2016 after some renovations. All praise, glory and thanksgiving to God, the church now is a fully functioning church, that has all its services in 100% English to have a welcoming atmosphere for anyone searching for an ancient faith church. The church's vision and mission is of love, integration and outreach and establishes and more importantly practices its five core values: 1) God centered church with modern day relevance. (2) Being faithful to God's greatest commandments of loving God and loving neighbor (3) Mission minded (4) Unity in diversity (5) Seeker friendly.

There are no upcoming events.